In my Bible study, Courageous Faith, there is a portion devoted to consecration – what it is and what it means. That word, consecration, tends to usher in silence and uneasiness. It can stir up negative or uncomfortable emotions, because it seems at first to be just that. But the truth is that it isn’t negative at all; however, that may be how we experience it.

What is consecration, other than sounding like a scary word? In simplest terms, it means to be set apart and holy, made clean. As a follower of Jesus, it’s something that has already been done, as well as a process. I am set apart and made holy because of Jesus. I am also in the process, of refining and growing as one who is holy and set apart for God. The first part of it being a done deal is important; it makes room for grace, in the process.

One of the things I learned while writing Courageous Faith, is that God often told the people of Israel to consecrate themselves, before He would do something miraculous. For example, Joshua 3:5 says, “Consecrate yourselves, for tomorrow the LORD will do wonders among you.” This command was given just before God parted the Jordan river, so that the people of Israel could cross over to their Promised Land, on dry ground. If waters like that being parted isn’t a miracle, I don’t know what is!

The consecration process was one of setting themselves apart for God, preparing themselves for Him and what was getting ready to take place. Consecration in the Old Testament took place in various ways. In this occasion, it may have been washing completely – body and clothes. As a follower of Jesus, how might I be consecrated? Scripture tells us that we are set apart for God through prayer and His word (1 Timothy 4:4-5). The renewing of our mind through prayer and God’s word can be seen part of the process of consecration.

The process can be uncomfortable, just like the word itself. However, did you catch what came after the consecration of the Israelites? Wonders. Something miraculous! While we may not see waters part in our lifetime, I’ve seen and experienced some pretty awesome stuff. Several years ago, I had a season of three months that I would never care to repeat. At the time, I didn’t see it as consecration, but more of a testing that felt like punishment. Life was just happening, and it was no fun. However, those three months of trials were followed up by one of my sweetest spiritual seasons to date. It was a season of growth and heavy-duty heavenly download. To me, it was wonder-filled.

One of things I learned through that hard season, was that I really did trust and believe God was who he said he was. I leaned on my faith in a way I never had before, in a very tangible way. That season made God so real. I was able to get angry with Him and be honest, yet know that He would never leave or forsake me, and he love me no matter what. I could call on His name, and know that he hears me.

Wounding was followed by wonder. That season brought out some of the doubts I had been harboring, it made me a little more “clean” in my faith. It was a step in the consecration process. Though I didn’t, and couldn’t, see it in the moment. 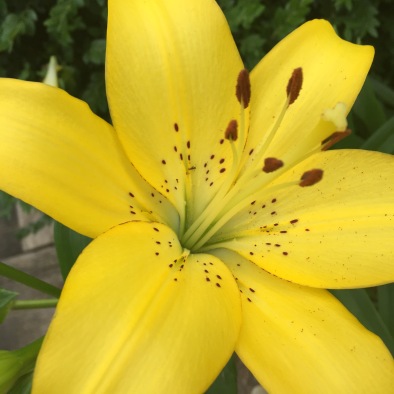 I’m wondering if you’ve had the same experience. Where God brought you through a season, only to see and experience something wonderful afterwards?

Thankfulness can be a hard place to live from if you’re in a season of consecration. I want to challenge you to go to God, be real with him. Be grateful, and ask God to show you His glory in it all.  Love you!